The roar that greeted Venus Williams when she stepped onto the court at Indian Wells for the first time in 15 years was heartwarming, and the way she handled it was classic.

As she walked toward her chair, her face enriched by a charming smile, she acknowledged the love with an appreciative wave.

It was vintage Venus — cool, regal and gracious.

In fact, throughout their stellar careers both Venus and Serena Williams have epitomized character and class while reaching the top of the tennis world and changing the way the women’s game is played.

Of course, there was Serena’s profanity-laced tirade at a line judge during a 2009 U.S. Open semi-final match. But that was an aberration.. 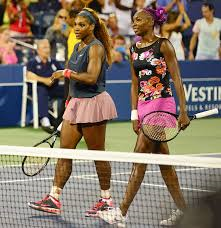 From the time Venus and Serena bounced onto the professional tour as teenagers in the mid-1990s, with their stringy beaded cornrows, I have admired how well grounded they were and their ability to handle media and adversity.

I also have been impressed by their devotion to family and their God, a testament to their upbringing. As my Grandma Hattie would say, Richard (Williams) and Oracene (Price) sho’ raised those girls right!

So it should not have been any great surprise when Serena, last year, and Venus, this year, announced they were ending their boycott of the tournament at Indian Wells.

If you’ve forgotten about or never saw any video of the 2001 incident, here’s a refresher on one of the ugliest episodes in U.S. tennis history. It is a stark reminder of how quickly this country can default to its racist base on matters involving people of color.

It started when Venus pulled out of a semi-final match against Serena with because of an injury. Her withdrawal refueled speculation that Richard Williams was controlling the outcome of matches between the sisters.

When Serena, then 19, stepped onto the court to play the final against Kim Clijsters two days later, she was booed unmercifully. But the torrent didn’t end there. The crowd booed Venus and Richard as they walked to their seats. Booed when Serena double-faulted. And booed when she defiantly shook her fist in victory after winning the match in three sets.

When asked during the post-game interview about the reception and rumors of match-fixing, Serena responded remarkably well given what she had just endured.

“The reception wasn’t so good, but if you’re a champion you should be able to get through it,” she said. As for the rumors, she added, “Everyone has their speculations…I’m just out here competing, trying to be the best player in the world.”

The next year, Serena became the number one female player in the world and has held that distinction several times. Her consecutive streak at the beginning of 2016 was 150 weeks.

Over the years, Serena and Venus have compiled a sterling record of statistics, too numerous to cite them all.

But here are a few: 28 Grand Slam singles titles combined; 13 Grand Slam doubles together; 118 overall singles titles; three Olympic gold medals in doubles and one each in singles. They have collected roughly $110 million in prize money, millions more in endorsements.

(Serena was the second highest-paid athlete in the world behind Maria Sharapova in 2015, earing $11.6 million in prize money and $13 million in endorsements.)

Venus and Serena have made us proud. They have been role models on many levels — as tennis champions, businesswomen, philanthropists and ambassadors of the sport.

Many cite an essay Venus wrote in 2006 as the pivotal factor leading Wimbledon officials to finally agree to equal pay for women and men.

Without question, a spot in the International Tennis Hall of Fame awaits the Williams sisters. The only question is when will they retire to claim it.

Venus will turn 36 in June, Serena 35 in September. A retirement date doesn’t seem to be on their calendar.

It’s as if both have unfinished business — perhaps another Grand Slam title or two for Serena to tie or break Steffi Graf’s Open Era record of 22; perhaps another Wimbledon title for Venus; or maybe another Olympics medal for both at the summer games this year.

Or maybe it’s just to play in another Indian Wells tournament or two to end that terrible chapter in their careers with a positive paragraph.

Here is some of what Serena had to say in an essay last year about her decision to return:

“It has been difficult for me to forget spending hours crying in the Indian Wells locker room after winning in 2001, driving back to Los Angeles feeling as if I had lost the biggest game ever — not a mere tennis game but a bigger fight for equality.

“Emotionally it seemed easier to stay away. There are some who say I should never go back. There are others who say I should’ve returned years ago. I understand both perspectives very well and wrestled with them for a long time. I’m just following my heart on this one.”

It was noble of Venus and Serena to return, and it was refreshing to see the spectators embrace them with standing ovations. After losing in the final on Sunday, a choked-up Serena told the crowd how much the support meant to her.

It was a touching moment. Yet, if these super sisters had decided to never go back, I would not have been mad at them.