Led by Serena Williams, African-American women made an impressive showing at the recently completed 2016 French Open, the second of four Grand Slam events on the men’s and women’s professional tour.

Of the 18 U.S. women who competed on the red clay at Roland Garros, six, or one-third, were African American. And all but one made it past the first round.

In addition to Serena, who again came up one match short in her quest to capture a record-tying 22nd Grand Slam title, the field of black women included sister, Venus Williams, rising stars Madison Keys and Sloane Stephens and promising players Taylor Townsend and Sachia Vickery.

Serena, Venus and Keys joined Shelby Rogers as the only American women to advance to the fourth round. Rogers’ suprising run ended in the quarterfinals.

The success of the African-American contingent amounted to a bonanza in prize money and Women’s Tennis Association ranking points, particularly for the lower-ranked players.

Here are their highlights: 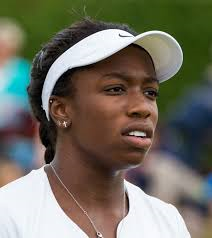 Sachia Vickery — The 21-year-old Miramar, Fla., native entered the tournament ranked No. 165. She lost in the first round but had won three qualifying matches to make it into the main draw. She left Paris with 40 additional ranking points and a check for $32,314. She moved up to 151 in the rankings. 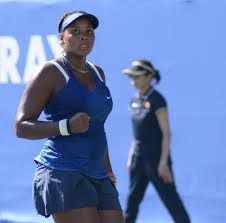 Taylor Townsend — Townsend, 20, a former girls junior No. 1 player, earned a tournament berth by winning the USTA Pro Circuit Roland Garros Wild Card challenge. The Chicago native made it to the second round, earning $64,628 in prize money. The 70 ranking points she won moved her to 154 in the women’s rankings from 172. 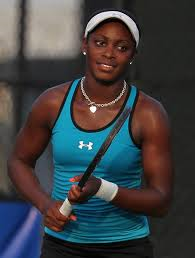 Sloane Stephens — This has been a feast-or-famine season so far for the highly talented Stephens. The 23-year-old Plantation, Fla., native has either won the tournament she’s entered — three titles this year — or gone out in the first round, except for Roland Garros where she advanced to the third round. She  picked up 130 points, $109,868 in prize money and advanced two spots in the rankings to No. 20.

Madison Keys — Another gifted young player with phenomenal power, Keys, along with Stephens, is considered a potential Grand Slam champion. Keys, 21, from Rock Island, Ill., reached her second consecutive Grand Slam fourth round, the first coming in Australia in January. Last year, she was a semi-finalist Down Under. For her run at Roland Garros, she won $186,345 and 240 points. In the WTA rankings, she moved up one spot to No. 16.

Venus Williams — A former world No. 1 with five Wimbledon and two U.S. Open singles titles on her resume, Venus shows no signs of hanging up her racquet. At age 35, she moved back into the Top 10 (No. 9) with her fourth-round finish at Roland Garros. She, too, earned 240 points and a check for $186,345.

Serena Williams — Serena, 34, left Roland Garros still at the top of the WTA rankings and still stuck at 21 Grand Slam titles. She lost in the final in Australia and in the final in France and now has to look to Wimbledon for that so far elusive 22nd title that would equal the Open-era record held by Steffi Graf. For her effort, though, she gained 1,300 points and took home $1,077,139.

While Serena and Venus have been the heart of United States Tennis Association’s women’s tennis for more than a decade, Keys, Stephens, Townsend and Vickery are part of a crop of young talent that has USTA officials glowing about the future of American tennis on the world stage.

One thought on “U.S. diversity on display at French Open”