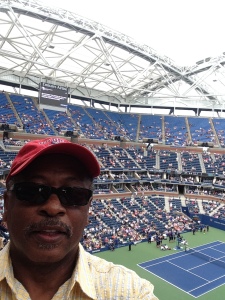 Serena’s early exit. Coco’s big win. Another Sloane slump. Or Donald Young’s plunge into obscurity. Any one of those storylines could have been suitable for a blog on the 2020 Australian Open from a black perspective.

But I chose to focus on Taylor Townsend, a 23-year-old Chicago-born lefty, who reached the second round of the first Grand Slam of the new tennis season.

Now, you may be wondering why is losing in the second round so noteworthy. I would say it’s not, per se. But considering what Taylor has endured and overcome since picking up a tennis racquet as a toddler, she deserves recognition and applause to be competing at such a high level.

Taylor was 16 and ranked No. 1 in the world after winning both the girls’ singles and doubles Australian Open championships in 2012, as well as the juniors French Open and Wimbledon doubles crowns. Yet, despite those accomplishments, she wasn’t fit enough in the eyes of the United States Tennis Association to compete in the US Open tournament.

The USTA balked at providing financial support for her to enter the tournament, citing concerns about her weight, and asked her not to play. The organization also declined her request for a wild card entry into the US Open main draw qualifiers, even though she had won a first-round match the previous year.

That decision by then USTA head of player development Patrick McEnroe drew a torrent of stinging criticism. Among the passionate critics was Lindsay Davenport, who was the last American girl to have won both singles and doubles titles at a Grand Slam, accomplishing the feat at the 1992 US Open.

USTA officials apparently never thought about the message such a move would send to young girls who didn’t fit the organization’s image of tennis fitness. It also did not look good for an organization that for decades had barred blacks from participating in its events but purportedly was now committed to inclusion and diversity.

The USTA relented and reimbursed Taylor for expenses. But the damage had been done. Taylor parted ways with USTA coaches and set out on a pro career. She finished 2012 as the ITF (International Tennis Federation) Junior World Champion.

I often wondered how much of an impact that controversy had on Taylor’s development as a professional tennis player. Tennis is a sport in which confidence and self-esteem are as integral to success as stroke proficiency and fitness. I imagine it would be difficult to maintain confidence and self-esteem after being told by your home organization that you’re unfit for the sport.

But about 10 days before this year’s Australian Open began, I learned that it wasn’t the first time Taylor had to cope with body-shaming.

In a Jan. 9 post on the Instagram site managed by young tennis pro Noah Rubin, Taylor shared that at a young age she “was kicked out of a tennis program and the directors told my parents I was fat, lazy and uncoachable.”

“From the beginning,” she wrote, “people looked at my physique and automatically judged my abilities before I walked on the court and started playing. The tennis court was my happy place, where I felt free and where opinions didn’t matter.”

I saw Taylor in her happy place at the Citi Open in Washington, D.C., in 2013, her first full year as a pro. She and Canadian Eugenie Bouchard, with whom she had won the 2012 girls’ Wimbledon title, nearly won the doubles crown. I remember being impressed by her poise in such a big match and the power of her overhead smashes.

Taylor had some early success on the pro circuit, winning the singles and doubles titles at two lower-tiered tournaments in 2014 and reaching the third round of the French Open that same year. She cracked the Top 100 in singles at the start of 2015 but ended the year ranked No. 304.

As if the USTA controversy wasn’t enough for the teenage star to have to deal with, Taylor’s world was rocked by a more personal disappointment, as she revealed in her Behind The Racquet post.

“I found out that my mother was stealing money from me,” she wrote, “and was using my prize money earnings and endorsements for her personal benefit.”

In 2018, reunited with childhood coach Donald Young Sr., Taylor reached a Women’s Tennis Association high of No. 61 in the world. She helped lead the Philadelphia Freedoms to the World Team Tennis championship match. The team lost, but Taylor won the league’s female Most Valuable Player award.

Taylor patterns her serve-and-volley style of play after idol Martina Navratilova, winner of 59 Grand Slam singles titles — 18 in singles, 31 in doubles, 10 in mixed doubles. She seems to have found her groove on the singles court, finishing inside the Top 100 the past couple years. But it appears she may be a better doubles player.

On the ITF circuit, she has competed in 13 singles finals and won 10. As a doubles player she is 17-7 in championship matches.

Last summer, Taylor notched her first win over a Top 10 player, defeating No. 4 Simona Halep in the second round of the US Open. She began the 2020 season ranked No. 79 and moved up seven spots after a first-round victory at the Australian Open.

“Her win over Halep at the US Open was huge because it validated the work she has done off the court to refine her game,” said Harris, author of “Charging the Net: A History of Blacks in Tennis from Althea Gibson and Arthur Ashe to the Williams Sisters,” published in 2007, and the newly released “Different Strokes: Serena, Venus, and the Unfinished Black Tennis Revolution.

“I’m sure she knows she can win a title now,” Harris said via email. “She’s a lefty who plays in a style unlike anybody else. That will help her. She had a strong run at the Volvo Open on clay in SC (South Carolina)  last year. I wouldn’t be surprised at all if she wins her first WTA Tour title there.”

Taylor, too, believes her time has come, as she hinted in her Behind the Racquet post.

“It has been a rocky road to get to where I am right now,” she said. “The experience of being told no, not fitting the ‘image,’ being internationally body shamed, struggling with inward depression and outward confidence issues, have all given me the strength to stand tall…I am proud of the person I have become, and I am so excited for the growth ahead.”